Hyper fans are a quiet, smooth and efficient hydroponic fan that has the highest CFM per watt of any fan in the industry. They also use half of the power and produce half of the heat when compared to traditional EC and DC motored fans. They have two ranges including their regular Hyperfan models and their stealth Hyper fans which produce little to no noise. They also have speed and temperature controllers which are extremely handy when dealing with environmental control within an indoor garden.

Hyper Fan™ Next Generation "Multi-Phase" EC Motors are vastly superior to all existing fan motor technology. "Multi-Phase" technology allows the motor to be energized 12 times per revolution as compared to 2 or 4 times with competitors fans, making the application of power to the fan blades smooth, ultra efficient and vibration free. Next Generation "Multi-Phase" EC Motors use up to half the power and produce half the heat of traditional EC and/or DC motors. This results in greatly reduced energy costs coupled with less wear, greatly increased reliability and a longer expected lifespan than any other fan in its class. 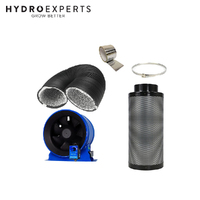 Phresh Filters and Pressure Drop Carbon filters cause a pressure drop across the fan. An unrestricted fan working on full power will give the manufacturer’s specified air flow but when a carbon filter is connected to the fan it will reduce the air flow. Phresh Filters have the lowest air flow drop across any fan due to the carbon quality and superior design. The triple activated carbon RC4/ ...