High-pressure sodium lamps are quite efficient—about 100 lm/W—when measured for photopic lighting conditions. The higher power versions of 600 W have an efficiency of 150 lm/W. They have been widely used for outdoor area lighting such as streetlights and security. Understanding the change in human color vision sensitivity from photopic to mesopic and scotopic is essential for proper planning when designing lighting for roads.

Xenon at a low pressure is used as a "starter gas" in the HPS lamp. It has the lowest thermal conductivity and lowest ionization potential of all the non-radioactive noble gases. As a noble gas, it does not interfere with the chemical reactions occurring in the operating lamp. The low thermal conductivity minimizes thermal losses in the lamp while in the operating state, and the low ionization potential causes the breakdown voltage of the gas to be relatively low in the cold state, which allows the lamp to be easily started.

A variation of the high-pressure sodium, the White SON, introduced in 1986, has a higher pressure than the typical HPS/SON lamp, producing a color temperature of around 2700 K, with a CRI of 85, greatly resembling the color of an incandescent light. These are often used indoors in cafes and restaurants to create a particular atmosphere. However, these lamps suffer from higher purchase cost, shorter life, and lower light efficiency. 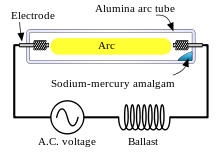 Diagram of a high-pressure sodium lamp.

The first and last states are stable, because the lamp resistance is weakly related to the voltage, but the second state is unstable. Any anomalous increase in current will cause an increase in power, causing an increase in amalgam temperature, which will cause a decrease in resistance, which will cause a further increase in current. This will create a runaway effect, and the lamp will jump to the high-current state (#3). Because actual lamps are not designed to handle this much power, this would result in catastrophic failure. Similarly, an anomalous drop in current will drive the lamp to extinction. It is the second state that is the desired operating state of the lamp, because a slow loss of the amalgam over time from a reservoir will have less effect on the characteristics of the lamp than a fully evaporated amalgam. The result is an average lamp life in excess of 20,000 hours.

In practical use, the lamp is powered by an AC voltage source in series with an inductive "ballast" in order to supply a nearly constant current to the lamp, rather than a constant voltage, thus assuring stable operation. The ballast is usually inductive rather than simply being resistive to minimize resistive losses. Because the lamp effectively extinguishes at each zero-current point in the AC cycle, the inductive ballast assists in the reignition by providing a voltage spike at the zero-current point.

The light from the lamp consists of atomic emission lines of mercury and sodium, but is dominated by the sodium D-line emission. This line is extremely pressure (resonance) broadened and is also self-reversed because of absorption in the cooler outer layers of the arc, giving the lamp its improved color rendering characteristics. In addition, the red wing of the D-line emission is further pressure broadened by the Van der Waals forces from the mercury atoms in the arc.